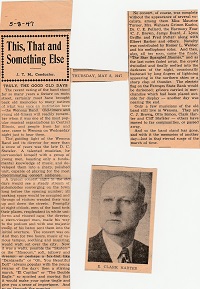 This, That and Something Else
J. T. M., Conductor

The recent razing of the band stand for so many years a fixture on main street, ... No concert, of course, was complete without the appearance of several vocalists, among them Miss Maurine Turner, Mrs. Wahneta Grimm Kuehn, Dr. C. E. Pollard, the Harmony Four (C. J. Brown, James Euard, J. Lynn Griffin and Fred Potter) along with Elbert Barker and others. Novelty was contributed by Homer L. Webber and his mellophone solos. And then, alas, all too soon, came the finale, "The Star Spangled Banner," ... Only a few musicians of the old band still live in Wenona. They are C. J. Brown, Otto Simon, Clark Harter and Cliff Stateler - others have moved to far communities, or passed away. ...

"Northampton was then the trading point for a large circle around it. Richard Scholes moved there from a farm south of Princeville and opened a good store. He was a man of fine character and well liked. When Chillicothe got started and had the advantage of the river transportation, he and others moved there and Northampton's only excitement was election day. Scholes' first wife was a sister of James Dalrymple, and George Scholes, of Marshall County was their son. The son went to the Mexican war and on his return married Lola, daughter of Stephen Wilmont. She was working at my father's when married to him.

"Scholes' second wife was the widow of Jered Stillman from near Mt. Hawley. Her daughter married Dr. William H. Wilmot. The rest of the family are well known to Chillicothe citizens, as they were a prominent family in its past history."

Extracted 20 Oct 2016 by Norma Hass from History and Reminiscences, from the records of Old Settlers Union of Princeville and vicinity, Volume 2, published in 1915, page 13.

A photo of a "Pioneer" gathering which took place periodically in the summers during the late 1800's in Marshall County, Illinois. Caption said "Marshall County Snow Birds," which refers to a very bad winter with heavy snow that occurred there sometime around the 1830s or so. Any help identifying any of those pictured will be appreciated.

Contributed 05 Aug 2020 by Mary Knapp ~ My Family is the Major Elias THOMPSON Family, who intermarried with LYONS, SMITH, COLEMAN, BRADLEY, LATHROP, KIDNEY, ROWE, AGNEW, KNOCK, BARNEY families. They first came to Illinois in the early 1820s and settled in Sangamon County then removed to Marshall County in the 1830s.