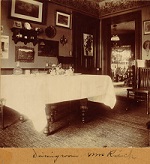 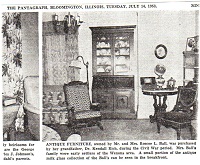 Old Resident of Putnam and Marshall Counties Passed Away

Julia Pamelia Baker was a daughter of Leonard Baker and Laura Shepherd Baker. She was born in Lawrence, NY, March 20, 1834. When a small child, her parents and older brother, Oscar M., moved to Berkshire, VT. She was nine years old when her mother died. Two years later the father married again. In 1845 the family decided to move out to Illinois. They came down the canal and through the lakes to Chicago, and there took a covered wagon which had hauled grain from Magnolia, IL.

Mr. Baker's older brother, Charles, lived here and his sister, Mrs. Morrell, kept the post office and tavern, which was a famous stopping place on the way to Springfield. Dr. Morrell was a state representative at the time and their daughter, Mary, was the wife of Dr. Ashley, known for many miles around. In this year, a little sister was added to the family but the mother did not live long and the two little girls grew up in the care of Mrs. Morrell and Mrs. Ashley.

Soon Kendall E. Rich came searching for a location to practice medicine and November 20, 1851 married Julia. To this union four children were born--Frank Kendall who died at the age of two years, Mary B; Charles E. of Farmer City; and Kate, wife of Charles Burgess, Sr, of this city. The family moved to Henry in a861 and in 1862 Dr. Rich received an appointment as Assistant Surgeon in the 73rd Regt IL Inf Vols.

After returning from the army, weakened by malaria, he wished to leave the river town of Henry and in the spring of 1864 moved his family to Wenona. Dr. Rich died in September, 1890. When a young medical student he enlisted in the War with Mexico in Co K, 1st Regt US Dragoons. He served at Vera Cruz and New Orleans as hospital steward during the war. Mrs. Rich has drawn a Mexican pension from the government for a number of years for this service.

Suffering from a cronic (sic) trouble, she has been an invalid, and social duties had been given up for many years. She was always patient, kind, and cheerful to those who ministered to her. Accepting the Savior in early life, she had a simple Christian faith without denomination. She was passionately fond of flowers and the beauty of nature. She had retained all her faculties, was a reader of the daily news and current magazines, and much good literature.

Her only brother, Oscar Baker, died some few years before her husband. and her only sister, Mrs. Laura Scott, mother of C. B. Scott of this city and S. W. Scott of La Salle, resides in Warrensburg, MO, with her two daughters.

The holidays had been particularly enjoyable to Mrs. Rich but January 2 a serious attack of pneumonia set in and made it rather doubtful whether she would recover. She slowly improved and was able to be up and dressed. A sudden cold rapidly used up her frail strength and Tuesday morning, February 17 at one o'clock she passed beyond the need of our love and care.

Thursday afternoon at 2:30 o'clock funeral services were held at the home conducted by Rev R F Cressay, pastor of the Presbyterian Church who took for his text, Job V 26. She was 85 yrs 10 months 27 days old. Mrs. Walter Scott sang "Beautiful Isle of Somewhere" accompanied by Mrs. C. B. Scott. The remains were laid to rest in Wenona Cemetery.

The family of Mrs. Rich wish to express their most sincere thanks to all those who assisted them with kindly service, expressions of sympathy and beautiful flowers during the funeral rites ot their beloved mother.