Thomas D. Lewis and Lydia M. Throwbridge were married 06 Jan 1848 in Cass County. This was her second marriage; her maiden name was Lydia M. Bonney.

Thomas died 23 Apr 1852. Their daughter, Martha Margaret, was only a baby at the time. Thomas was laid to rest in Hoyt Cemetery, Henry township.

Five years after Thomas died, Lydia was briefly married 17 May 1857, to Charles Zilm. 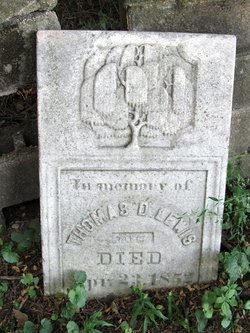 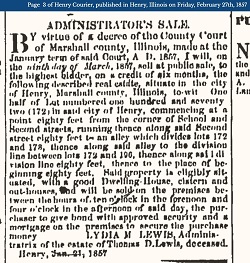 Lydia and her daughter, Martha, are listed on the 1860 census of LaSalle County. I'm not sure where Charles was at that time, but he shows up later in a 1865 Census in Bell Plain, Marshall County. The census page is not readable from water damage, but it is listed online.

The subject of this sketch died on Saturday, and was buried from her late residence on Sunday afternoon at 2 o'clock. Lydia M. Bonney was a native of New York, born in 1823. She was married three times. First to Marcus Trowbridge. He afterwards was removed by death and two children. In 1849 she married Thomas D. Lewis, and through the influence of her brother-in-law and sister, Mr. and Mrs. Hiram Blossom, they moved to Henry in 1850. Here her only surviving child was born, who was nine months old when Mr. Lewis, her father, died, the date of his death being April, 1852. The funeral was a large one as he was favorably known, being under the auspicious of the Independent Order of Odd Fellows, M. Lewis being the first death of the order after its institution in Henry, and its first burial. Subsequently Mrs. Lewis married Charles Zilm, but this union not proving congenial after some time a separation took place. Mrs. Lewis was the mother of six children, the only surviving being Mrs. York, wife of Capt. Solomon York, of the favorite steamboat City of Peoria.

Mrs. Lewis has been a resident of Henry about 43 years. She was afflicted for many years with something like palsy, but competent to take care of herself, until about three months ago when stricken never to rise from her sick bed. She was a member of the M. E. church from her childhood, and lived respectively and beloved by all who knew her. Her life was uniformly unostentatious, hospitable, kindly and neighborly. She made no enemies and had none. As she remarked to her pastor while ill, "She loved everybody," so she had exemplified it through all her long life.

Brief, impressive services were conducted by Rev. W., Woolley, whose remarks were in the form of tender eulogy and eloquent tribute of the dear departed. The songs were very sweet and beautiful. The pall bearers were City Marshal I. P. Bush, Henry Vogelsang, E. T. Disosway, George Brooks, Howard Young and George Burt. At the close of the services the procession was formed, and the casket lowered into its earthly sepulcher beside the form of Mr. Lewis in the old Henry cemetery. Peace to her ashes.

Eyes grown weary with suffering closed to mortal sight Saturday, when Mrs. Sol York passed away, after prolonged illness. For several years Mrs. York had been ailing and the utmost effort of a loving husband and children availed little to alleviate her condition.

Especially heavy is the burden of sorrow laid on the shoulders of her devoted husband, who will miss the faithful helpmate with whom he shared his joys and sorrows. Lonely also will be the home of her daughter, where she has spent the last years of her earthly life.

In 1869 she was united in marriage to Sol York at Peoria, Illinois. The young couple took up their residence in this city, until in 1900, when they moved to Peoria, where they lived until about two years ago. Her health being poor at that time, she and her husband went to Minneapolis, Minnesota, where they have since resided at the home of their daughter, Mrs. Ora Fox, where Mrs. York passed away, May 6.

The deceased was a loving wife, and fond mother and her demise saddens the hearts of not only her relatives but a host of friends by whom she will be sadly missed.

The remains were brought to this city Sunday, where short services were held at the J. N. Giblin funderal parlors, conducted by Rev. W. J. Carpenter. Interment was made in the city cemetery. The pall bearers were George Halbleib, Julius Watercott, Frank Baer, Amsa Joyce, Thomas McKenzie and Patrick Green.

Besides her husband and daughter the deceased also leaves one son, William.