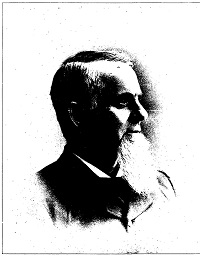 Spencer ELLSWORTH, the late well-known editor of the Lacon Home Journal, was born at Denmark, New York, June 10, 1824. His parents, Benjamin and Roxana ELLSWORTH, moved to Cattaraugus county when he was seven years of age. He only attended the common schools of the day, but was a student and lover of books all his life, and at his death left a library of several hundred volumes. At eighteen years of age he came west and found employment in a general store at Galena, Illinois. Two years later, by strict attention to business and frugal use of his money, he was enabled to start a store of his own at Wyota, Wisconsin. In 1850 he married Lucy McCOLLUM, daughter of Dr. Asa McCOLLUM, of Leicester, Massachusetts, who survives him. Three children were born to them, the first, Lillian, living only sixteen months; the other two are: Evelyn Ninetta, now Mrs. T. L. JONES, of Henry, Illinois, and Spencer Ellsworth, the present publisher of the Journal. He removed to Elkader, Iowa, in 1855, where he engaged in general merchandise until 1862. In 1862 he located in Lacon, and, associating himself with E. H. HALSEY under the firm name of Ellsworth & Halsey, continued in the dry goods business until 1866.

He had a facile pen and all his life up to this time he had written more or less for local papers, and for several years had used the nom de plume of “Crowquill.” In 1866 he bought the Illinois Gazette, one of the oldest papers in Illinois, changing its name to the Lacon Home Journal. He loved his paper and his business, and he gave himself to it with a constancy that for eighteen years never flagged, and under his management the Journal became popular and one of the best country papers in central Illinois. He was especially interested in the instrumental in the organization of the Marshall County Old Settlers’ association. His love of the old and primitive led him to collect a large amount of historical matter in regard to the settlement and organization of Marshall and Putnam counties, which he published in book form under the title, “Records of the Olden Time,” a work of real merit. He was public-spirited, ever interested in the advancement of Lacon and was emphatically the father of the woolen mills, now in successful operation. He was a republican in politics, a Mason and a Knight Templar, a successful business man and universally respected. He died July 26, 1884, from injuries received in a runaway accident.

Extracted May 2011 by Norma Hass from The Biographical Record of Bureau, Marshall and Putnam Counties, Illinois, 1896.